Professional basketball isn’t for the faint of heart, and unless you’re one of the heaviest NBA players, there’s a lot you should do to ensure that you’re not tossed about during the game like a leaf in the wind. However, this doesn’t mean that being the heaviest NBA player will make you the most successful.

There’s a lot of physical fitness required of pro basketballers. Maintaining a high level of fitness and health ensures that players can keep up with the demands of jumping, running, and other movement imperative of high-energy sports. That’s why to play basketball successfully, you have to be tall and possess better skills than the average player.

When it comes to physique, athletes need to be strong, have excellent running speeds, and have agility. Not all players fit into the “ideal” physique required of the NBA, and some of these players have been the heaviest NBA players. Nevertheless, the past is witness to the benefits the heaviest NBA player brought to their team, some of which included defending the central part of the team.

If you are curious, we’ve created a list of the heaviest players in the NBA. Read on.

Click here to check out the top 5 best basketball hoops. 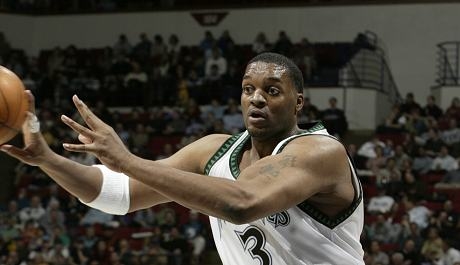 Don’t be shocked that the Big O, as he was popularly known, takes the crown for being the heaviest basketball player. Think about the size of a pygmy hippo. When he began his career in the NBA, which lasted 11 years, Miller weighed only 270 pounds.

Oliver Miller later got to a humongous weight of 375 pounds. Unfortunately, his weight played down his ability to play pro basketball, and he wasn’t a constant in the league. In 2012, the Big O found himself on the wrong side of the law after attacking a man in Arnold, Maryland, during a barbecue.

Supposedly, the heaviest player in NBA just needed a bite of some sumptuous brisket.

Related: Who Are The Tallest Tennis Players? 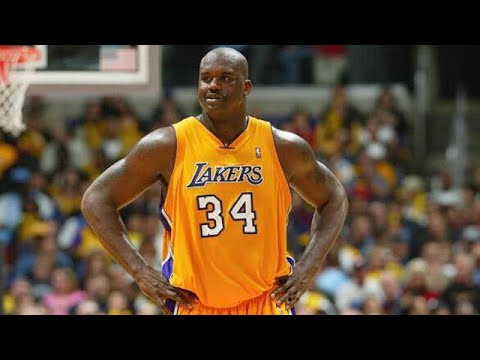 The superstar is one of the heaviest NBA players. Shaquille O’Neal weight: a possible athletic weight of 360 pounds. Just like the Big O, Shaquille Oneal’s weight on starting the NBA wasn’t much as he weighed 294 pounds.

He resonated with the crowd, and there was no time he was present during the league that fans and foe alike weren’t in awe of his athletic sprint across the floor or his mind-boggling slams. O’Neal decided to beef himself up after winning his first championship with the Lakers.

By 2002, he weighed 341 pounds. The rest is history. A few years later, Shaquille found himself at 360 pounds. Reports are indicating that he could have gotten to 370 pounds, thus, almost wrestling the Big O for a spot as the heaviest basketball player.

However, there’s no evidence to support these claims, and Shaquille maintains his spot. It is notable that O’neal also wore a size 22 shoe, which meant that he had the biggest feet in the NBA at the time. 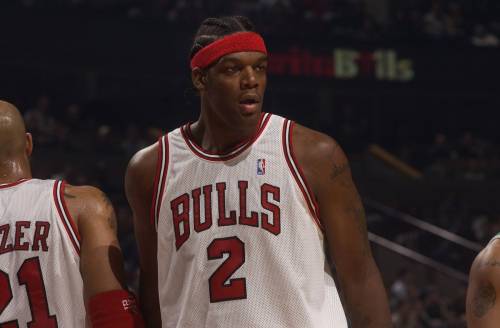 Following closely for a spot as the heaviest NBA player is 18-year-old Eddy Curry, who weighs at 350 pounds. Even though he isn’t the pro who is also the heaviest player in the NBA, his weight is notable, with many nick-naming him ‘Baby Shaq”. Curry is one of the luckiest pros to get right into the league immediately after high school.

During the 2001 NBA draft, he was the fourth player to get picked to play for the Bulls. Despite his weight, Curry had an exceptional 11-year career. Unfortunately, for Baby Shaq, his 11-year career wasn’t as perfect as he or fans would have wanted it to turn out as he was unable to recover from the effects of excessive obesity in the last two years of his career.

Just like Oliver Miller, who was the heaviest NBA player ever, his career came to an abrupt end. 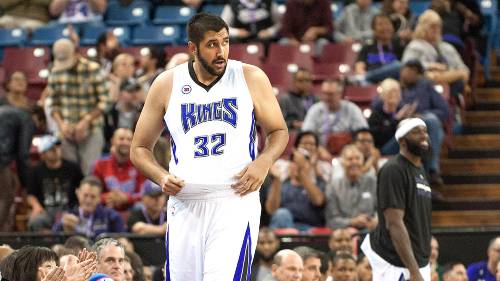 There’s competition for a slot on number 3 as Bhullar and Curry both weigh the same at 350 pounds. The only reason we’ve put Bhullar in fourth place is that he started his career after Curry ended his. Bhullar got into the league in 2014.

Even though he might not be an obvious choice for the list of who is the heaviest player in the NBA, this giant deserves recognition. He played for the Sacramento Kings for two games, after which the Reni Bighorns acquired him in the D-League.

Despite the fall, he made some waves, and in 2015, he played for the Kings on a 10-day contract making him the first Indian player to compete in an NBA game. 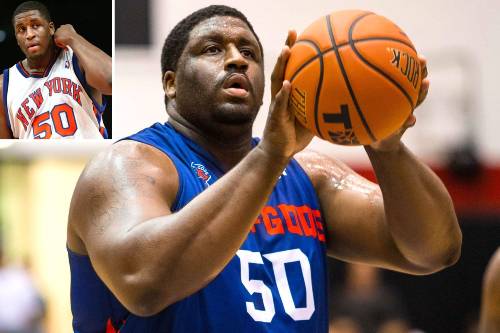 Our search for the heaviest NBA player wasn’t easy as there were too many contenders in close competition. Unfortunately for this player, his weight played against him most of his career. He was a finalist Player of the Year in Naismith College and ended up getting drafted ninth by the New York Knicks.

Sweetney started his career as a potential power forward but didn’t live up to expectations after his first two seasons. He was eventually signed up to the Chicago Bulls but ended up getting cut. After several stints training with the Boston Celtics, his career came to an abrupt end when he didn’t make the team due to his weight issues. 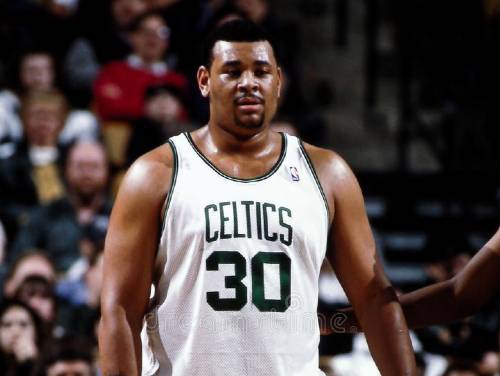 At 330lbs, Thomas Hamilton is our sixth contender. As with most other players, he started his career through college basketball. Unfortunately for Hamilton, he was one of the stars who let his body weight get ahead of his basketball potential.

He was taken in by the Bolton Celtics after getting undrafted but unfortunately only made 11 appearances to the court during his inaugural season. He was then taken in by the Houston Rockets but only managed to play 22 games. After that, he was released by the Rockets and ended his career. 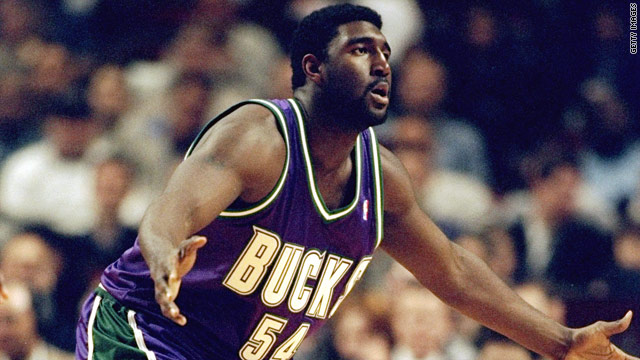 Weighing 320 pounds and at the height of 6.8 feet, Traylor had a massive body that earned him the nickname “Tractor.” He was undoubtedly the heaviest player of his time and unfortunately joined the list of basketball players with no control of their calorie intake. Like many other stars that came before him, Robert got noticed playing college basketball.

However, he was undrafted early in his career and ruined his potential for being an NBA superstar by losing focus on food. Years later, in 2011, the Tractor lost the battle and succumbed to a heart attack at the age of 34. 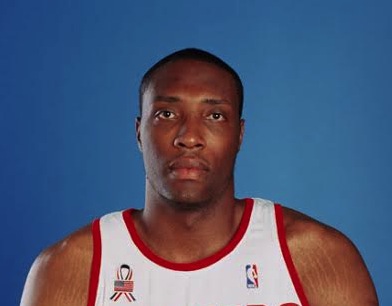 It seems that weight is a big factor to contend with when it comes to success in basketball. Besides Shaquille O’neal, a basketball superstar, few heavyweights have been able to carry their weight and careers. It’s a sad tale where weight wins against career success in the basketball pro world.

Priest Lauderdale weighed 325 pounds. Playing for the Atlanta Hawks, he had massive potential to make an impact but disappointed many after a 35-game season. After averaging 8.8 in 39 games, Lauderdale had to say goodbye to his short stint at the NBA. 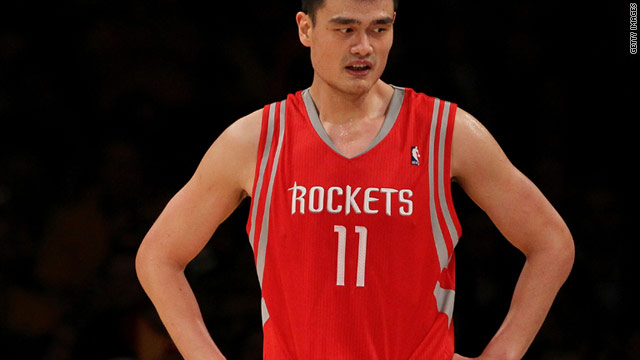 Our list isn’t complete without the Chinese mammoth Yao Ming. At the height of 7.6feet and 310 pounds, he is the tallest player to feature on the basketball Hall of Fame. His pro career started and ended with the Houston Rockets showing his loyalty towards the franchise.

He is one of the few heavyweights in NBA that had a decent career compared to other contenders on this list. Ming consistently brought the points home for the Rockets and scored an average 19 points each game.

Even with a weight of 310 pounds, Yao Ming proved that he was an efficient player earning himself a spot with the ALL-Star team an impressive eight times and five times with the All-NBA team. If that’s not impressive, nothing is. 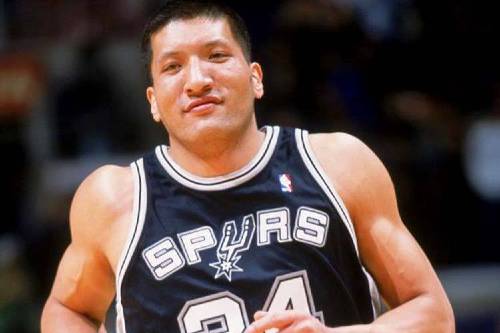 We’re starting to give up on heavyweights in the NBA, but fortunately, we’re at the end of our list of who is the heaviest player in the NBA. We started on a high note showing off successes of players who were able to maneuver their weight and attain success in the game.

This list isn’t about to end on the same note, but, hopefully, it’ll get someone to act positively where calories are concerned if they want to take pro basketball seriously.

Meet Mengke Bateer, another potential star whose career, much as it looked promising, didn’t quite flourish. His weight: 310pounds framed by a 7-foot body. Quite the giant, Bateer started a promising basketball career in China but wasn’t able to fit into NBA standards.

This, together with culture and language barriers, affected Bateer to the point of losing his career. He played for two teams in three years but only managed 3.4 points for each game he played.

Related: The Evolution of Basketball Shoes

Who are the heaviest NBA players by position?

Are the portland trail blazers still a team?

Founded in 1970, the portland trail blazers are still a team that plays in many NBA season games. This team is known as The Blazers. This team was founded in Portland, Oregon, USA.

Who has the highest blocks per game for the Boston Celtics?

Across 338 NBA season games, Mark Blount holds the record with 318 blocks. With this record, he is the one holding the highest blocks per game for the Boston Celtics.

The 82-game of the NBA season 2021 is scheduled to run between mid-October through April. This is said to be the 76th season for the National Basketball Assocation.

Who hit the first 3 pointers in NBA history?

In a 114-106 win over the Houston Rockets, Chris Ford of the Boston Celtics is credited to score the first 3 pointers in NBA history.

It’s clear that unless you’re Shaquille O’Neal or can push your weight to work for you, being heavyweight can be detrimental for a basketball career. As an athlete, you must work together with people who will help you keep your fitness in check and advise you on nutrition.