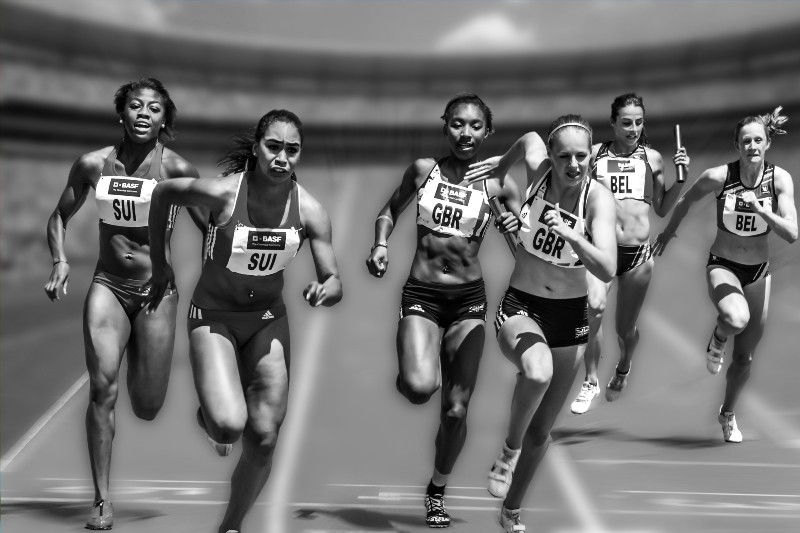 Who says only male athletes can be strong, powerful and BIG? We are now in a world of sports crowded with the largest female athletes. And why not? Over a period of time, they have proved their competence and diligence.

The awe-inspiring physical power and prowess can get the cluster drooling over them. Today, female athletes are on equal footing with male athletes. From running at sweltering speeds to swimming in vicious ocean conditions or climbing the highest mountain, they have smashed the barriers and conquered the world. Women are fiercely ambitious. So, more power to them!

In sports, size does matter. We have some big names of the largest female athletes, sure to blow your mind. Take a look at the journey of these biggies who changed the world with their accomplishments.

Let’s just say this American weightlifter has literally lived in the gym. Holley Mangold started her weightlifting journey in 2008 and represented the United States at the 2012 Olympics. Holley weighs 415 pounds and has a personal record of lifting 562.2 pounds. She stands at 5 feet 8 inches, appeared on the biggest looser and definitely isn’t the only Mangold to make a statement in the sports sphere. Her brother plays a football center for the New York jets.

Holley ranks 9th amongst her 14 competitors in the same division and has achieved so much professionally. In college life, she mastered physiology, sociology and theology. She began playing football at the age of 7 and was the first woman to play a state-championship football game.

Fun Fact: In 2007, Holley pushed a truck’s steering wheel away and escaped a head-on collision.

Meet Nataliya Kuznetsova; she is perhaps not the tallest or the bulkiest athlete. However, she is a massive female bodybuilder who does not relinquish her steroid indulgence. Kuznetsova set foot in bodybuilding at a very young age (14 years) and has come a long way. With some insane stats of 18.5-inch biceps, she is surely the largest female athlete bodybuilder. Her achievements include the world champion titles for deadlifts, bench press and arm lifting.

The Russian female bodybuilder weighs 225 lbs of almost no fat and only muscle mass. Besides her remarkable professional accomplishments, her personal life has been a bible of motivation. The gym-goer is a powerhouse woman. In this male-dominated field, Nataliya has been a true inspiration.

Fun Fact: Some of her unequalled capabilities include a deadlift of 330 kgs, bench press of 200 kgs and squats of 374 kgs.

The pro tennis player gracefully makes it to the squad of the largest female athletes. Here’s an overwhelming fact that will sweep you off your feet. Maria Sharapova is the third tallest tennis player standing at 6 feet 2 inches. Oh, boy, who doesn’t love long legs?

Her career graph involves 800 matches with some impeccable skills on the court and back-breaking injuries. Despite that, she has made multiple comebacks with a bang. In 2015, she was entitled as the richest female athlete with a large share earning from endorsements. Miss overblown signed her first deal with Nike at the age of 11 and, eight years later, baffled everyone with another deal with Nike worth $70 million.

Maria knocked out the Tennis fraternity with her first Grand slam title at Wimbledon 2004. ‘Don’t be afraid of dreaming’, she always said and proved her capabilities by defeating Serena Williams in straight sets.

Fun Fact: Maria Sharapova was the youngest tennis player to make it to the Australian Open Junior tournament final. Whoa, she was only 15 years old! Also, she hit her first tennis ball at the age of four.

For starters, her arms have a lot of tales to tell. She’s not just one of the largest female athletes but also a great basketball player. Brittney Griner is an American player with an incredible record. She weighs 93 pounds and stands at 6 feet 8 inches (enough to prove her potential). To begin with, Brittney won two awards in NFL’s Punt as a grader schooler and taped seven dunks and 25 blocked single-game high shots in high school.

She is the only female basketball player to block a flabbergasting 500 shots and 2,000 points. The Texas native had a key role in USA’s Olympic basketball victory.

Fun Fact: Brittney Griner has been endorsing Nike since 2013.

The Croatian Olympic high jumper flaunts a glorious height and an incredible career graph. The longer your legs, the higher you jump. Blank Vlasic found her success at 6 feet 3 inches, that’s 1.9 meters tall. Being the daughter of Josko Vlasic, her sports avenue was no surprise.

Her high jumps have sure come a long way. But hey, it’s almost baffling to believe her entry at the first Olympic Games was at the age of 16. In 2000, Blanka also won the World Junior Championship in Athletics and had a fleet of bronze and silver medals at the Olympics. In totality, the European athlete has won 16 international medals despite suffering from a hyperthyroid condition. Her strict gym regimes and father’s guidance clearly got her well-deserved fame and triumph.

Blanka’s career-best jump of over two meters high is her claim to fame. The double Olympic medallist and two-time world champion; is not just considered the largest female athlete but also the most beautiful.

Fun Fact: Along with her myriad achievements under the blanket, her fan club is mesmerised by her beauty. Blanka Vlasic is also ranked high amongst elite athletes in the world.

Some honourable mentions to the list of largest female athletes include high-profile names like Amazon Eve, Sharran Alexander, Margo Dydek, Darya Klishina, Kerri Walsh Jennings and Yvetta Hlavacova. It’s only right to credit these women for how they changed sports history.

Over the years, sports have become gender-neutral and kudos to these female athletes. Thanks to their perseverance and performance, they are globally recognised in a new era of equality.