Rafael Nadal Injury: What It Means to His Health and Career 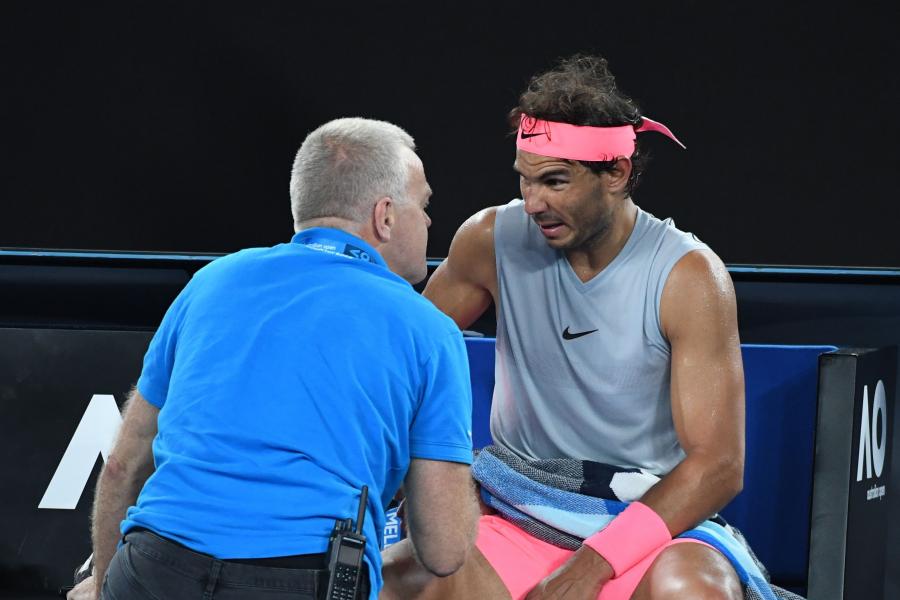 Rafael Nadal injury has made him withdraw from the Wimbledon semi-finals. The tennis pro was to face off with Kick Kyrgios, but the abdominal tear couldn’t let him play effectively. The 36-year-old Spanish player had been experiencing stomach discomfort for some time. However, the pain became excruciating during the quarterfinals against Taylor Fritz.

Towards the end of the second set, the Spaniard knelt and clutched at his stomach. Finally, Nadal requested a medical time-out where his sister and dad were pleading with him to call it off. But the “king of clay” battled through to the end.

Despite the great success in his career, Rafael had injuries that plagued him every step of his career. A stress fracture hampered the clay season in his ribs. He had also struggled with a foot injury.

After a progressive healing process, Nadal is forced out due to a new injury. It’s discovered that he has a stomach tear. He said that the injury may last three to four weeks and does not believe his schedule will be disrupted.

During the news conference, Nadal said, “I made my decision because I believe I can’t win two matches in these conditions. I can’t do the normal, correct speed.” Before this setback, Nadal had missed 11 Grand Slam events before his debut in 2003. The 36-year-old has been missing at least one tournament per year. Other injuries include:

In 2011, Rafael played briefly with clenched fingers after getting burnt in a restaurant. In 2015 and 2016, Nadal failed to reach the semi-finals of the Grand Slam, and many wondered if his career would end. But the tennis legend is used to more adversities and never gives up. Even with the best tennis racquets, winning any game need peace of mind and happiness. So Rafael has decided to take a back seat and take time to heal.

Despite playing matches with injuries, Rafael has had an exciting year so far. The US Open is the next Grand Slam fixture, starting on 29th August. Nadal’s participation is still unclear unless the abdominal tear has healed.

The stomach muscle stretch over the abdomen from the hips to the chest. It also covers the sides and center.

Doctors refer to pulled muscles as a tear or strain. Pulled muscles can happen through overuse, either by excessive force or stretching the muscle too much. As a result, it may feel painful or sore and restrict movements. And since stomach muscles cannot get supported externally, taking painkillers and resting are the remedies to such injuries.

Thus, withdrawing from Wimbledon was a selfless choice. Nadal has prioritized his happiness and health over any title. It might be sad, but he will reap the benefits.

Sports injuries are frequent and often unavoidable. While most can be managed without disrupting sports schedules, some impose a mental and physical burden on players.

To some athletes, injuries can unmask mental health issues, such as substance abuse, anxiety, eating disorders, and depression. There’s an emotional reaction, especially when processing the injury, its effect on the matches, and medical information. Some of the responses include:

However, response to the injury differs from person to person, and there is no predictable reaction or sequence. In more severe cases, an athlete’s career can be at stake. In this case, a team physician addresses psychological issues.

From observation, Nadal feels sad about missing Wimbledon, but he has no regrets about it for his health’s sake. But he’ll still need emotional support as he takes rest. However, trainers, team physicians, and coaches are recommended to support injured players.

Why Rafael Nadal is Still Dominant

Imagine being among the 128 players in a draw, and you end up holding the trophy. To make it even more sensational, you do that 14 times at Ronald Garros and 22 times at Grand Slams! That’s exactly what Rafael Nadal has achieved in his tennis career.

They say you need to get the best tools if you want the job done. When it comes to tennis, having the best tennis shoes or using quality tennis balls is one step to the winning goal. Willingness and preparation also play a significant role.

But what has kept Nadal at the top of the game despite many injuries?

The Man is Relentless

Rafael’s blood spills on the court for every tennis match. So it’s not surprising that he has won 34.4. % of the total games he has played. Whether it’s cold or scorching hot or he’s up or down two sets, Nadal plays with the same vigour.

Nadal is swift, and his spin is painful for the opponents. He takes advantage of every weapon on the court to his advantage. Being an aggressive player makes him win in almost every game.

At 36 years, Nadal is considered the oldest French Open champion. Even though his athleticism may have waned, he’s still capable of winning more titles. The Spaniard has won several titles from lost positions.

Tennis is an Art

One of the tennis tips is to work on your speed. But what about the correct grip and striking the ball well?

Playing is all about art, which Nadal has mastered quite well. From the best tennis nets to shoes and balls, the Spaniard always considers the quality of his tools. He practices regularly and stays fit. This helps especially with spinning and striking the ball with the correct speed.

Nadal gives excellent serves and forehand groundstrokes. His mastery of the backhand groundstroke also gives him an upper hand in winning matches. Over the years, he has mastered tennis art, making his playing style unrivaled.

It’s Not Yet Over

Rafael Nadal injury might have halted his win but not his tennis career. Every strand on his DNA spells out the victory. The world No.3 had had injuries before, which didn’t deter him from being his best. He looks set to follow the initial comeback, and soon, Rafael will resume his genetic superiority.